Two Thumbs Up For Milwaukee

Truth be told I wasn’t sure how this whole Nationals-in-Milwaukee thang was going to work out. I was more than a little spoiled by the whole Nationals-in-Burlington-Vermont thang for two years, and Viper and I were pretty sure we wouldn’t fit in, assumed we’d stick out like a Rochefort (yum) in a cooler-full of Miller (yikes). Word on the street was that San Diego was the also-ran host location for the 2013 and 2104 USA Triathlon Age Group National Championships, and I was really mourning San Diego’s loss.

Update: well done, USA Triathlon…this city totally-completely-wholly gets two thumbs up from cj. (Site Selection Committee, you are free to breathe a collective sigh of relief.)  So far Viper and I both love it! Well, I should say so far one of us loves it; Viper has yet to get his sea legs in this city by Lake Michigan, since he spent the better part of yesterday stuck on this truck, poor boy:

When I told the nice guy at Race Day Transport I was eager to be reunited with my trusty stead, he smiled and said “you and about 200 others whose bikes we shipped.” I assured him that while they might *want* their bikes, I was the only one who truly *neeed* hers. Guess who got her bike first? 🙂

With Viper out of commission for a few hours I was left to my own devices which in this instance means I had ample time to not only be issued my timing chip, but also ample time to lose it and find it again. (File under: Things That Only Happen To Me. What can I say? I don’t function well when Viper’s under duress.) Once I was done with that nonsense (I had left it at the Race Day Transport booth, whilst attempting to cajole the boys to pick up the unloading pace), I then had plenty of time to scope out the course…and check this out Viper and I get to ride not only on the highway but ON AN OVERPASS AND ON THIS BRIDGE!!!

Hoan Bridge, northbound side of I-794…the same side that will be closed for the race 🙂 Don’t tell my father: this bridge is named for a Socialist. Yep, it’s true: it is named after Daniel Hoan, one of the longest-serving mayors of Milwaukee. If this bridge looks familiar to you and you’ve never been to Milwaukee, it is probably because it was used to film the car chase scene in The Blues Brothers. Oh, HOW COOL IS THIS I ASK YOU?!?!?

….and here is the overpass…isn’t it great??? 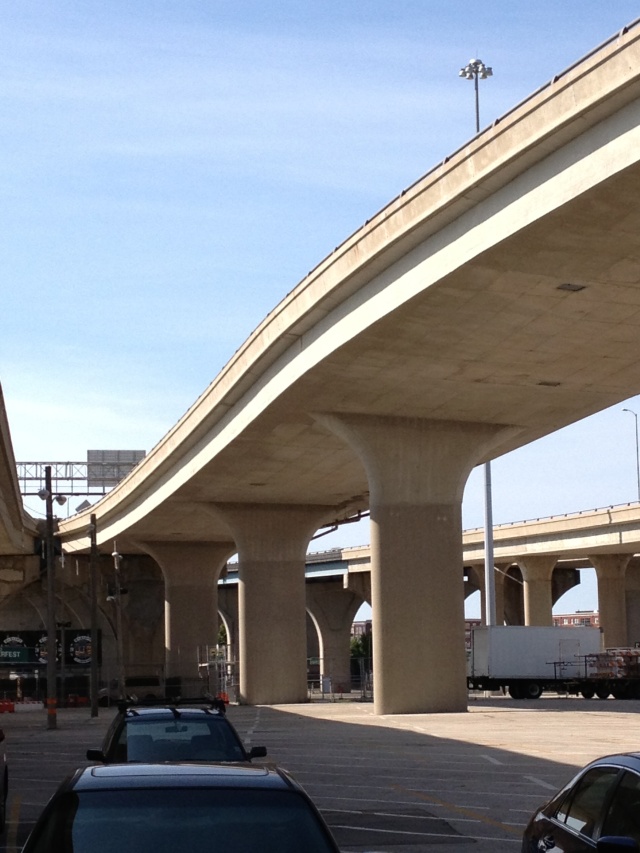 weeeeeeeee!!!!!!!! 🙂 Yep, right up that overpass on the way out…then right back down it on the way into transition. With that super-sweet decline, Viper is hoping to break the speed limit on the way back in, oh yes he is.

The non-highway half of the course is gorgeous, too… 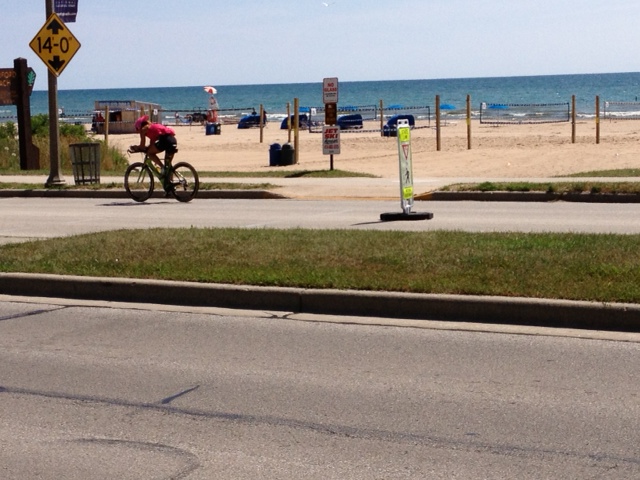 Since this is a triathlon, there are legs other than the bike and believe it or not I did a little recon on those too. The swim start is rather awesome, though I am a little concerned about that bridge…it is an out-and-back course, so swimmers will be going in both directions under that rather narrow span. Hmmmm….

the good news is I am in Wave 2…so the course won’t be terribly busy. I’ll also get to watch the Oly athletes duke it out on Saturday so going into my Sunday race I’ll better know what I’m in for. My coach is racing the Oly and he says he is looking forward to the “combat” of it. I am pretty sure he’s not joking.

The run course is totally tailor-made for cj, and by that I mean it would take a very active imagination to think there is anything remotely like a hill here:

Flat as a slice of Wisconsin cheese. All 3.1 miles of it. I know because I ran it yesterday. I am insanely excited.

I won’t have time to enjoy the scenery on race day, so I was glad to see it yesterday since the course is rather beautiful and not just on the lake side… 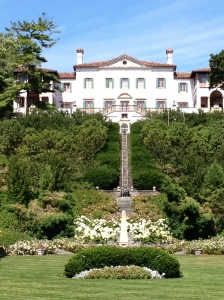 random scene of beauty on the bike course. Can’t really tell from the pic but that’s a waterfall cascading down. Really cool. 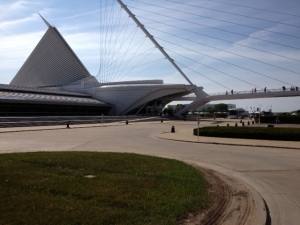 We both bike and run right past the Milwaukee Art Museum, which is a piece of art in an of itself. 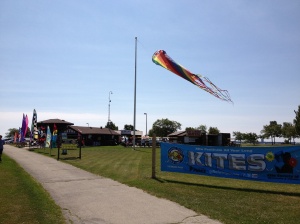 This shot is for Daughter #2, who would LOVE this store!

As a devoted ocean snob I have always thought lakes should not be able to call their shorelines “beaches.” Lake Michigan is an exception to the rule.

apparently beach volleyball is a huge hit at Bradford Beach–there are nets as far as the eye can see!

Net-net, Milwaukee is turning out to be just as cool as San Diego–perhaps even moreso since I never in a million years expected it to be cool. I found awesome coffee here…

OK, I was *told* to find it…my dermatologist is from Milwaukee and she suggested I seek this place out. Her coffee knowledge is clearly more than skin deep since this place rocks 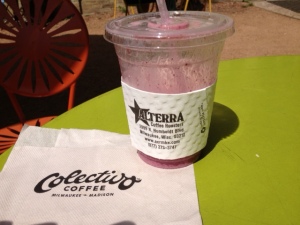 Alterra is actually undergoing a name change…it is now Colectivo, but is in that awkward brand transition phase where all the logos don’t quite coordinate yet.

…a great place for a pre-race dinner Saturday night…

Bartolotta’s Lake Park Bistro. The Barlotta family owns a restaurant in the Wynn in Vegas, too, or so I am told.

…and, mercifully, a bar that serves Belgian beer (hurrah!) 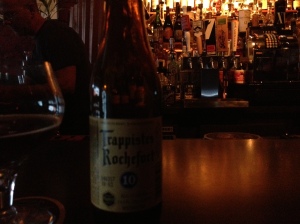 The Palm has a gazillion Belgian and is very, very dark and is in a very very unassuming building  on Kinnickinnic Street, which locals just call “KK”. The name comes from the English phoneticization of an Ojibwe word meaning “tobacco.”

One more lake shot…sorry, I am a little smitten with it… 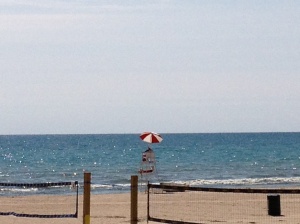 Pretty huge for a lake! I kinda covet that lifeguard’s job.

And now I am ready to race 🙂 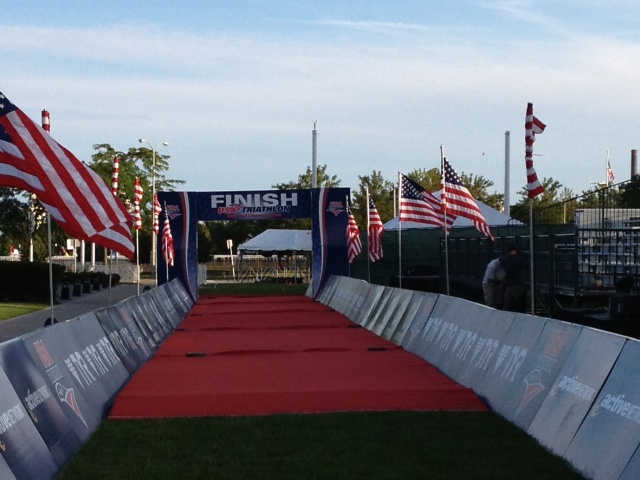 That’s all for now! Don’t doubt the Site Selection Committee, don’t judge a city by its bad beer and I’ll update you after I cross the finish line! – cj 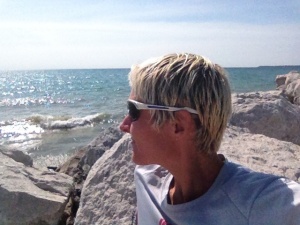 me at Lake Michigan, trying to look like this is not a self portrait 🙂

I'm a 40-something single mother of three--two great human girls and one four-legged Dalmatian banshee--who is hellbent on swimming, biking and running straight through my midlife crisis. Care to tag along? Crazy loves company! ;)
View all posts by garmin_girl →
This entry was posted in My Race Reports, Nationals. Bookmark the permalink.