I took a scarred bike, body, and brain up to Lowell this past weekend for FIRM Racing’s Wild Cat Sprint Triathlon, my first post-crash race. Little did I know this scared and scarred rider would be navigating a whole lot of scarified pavement, but we’ll get to that in a bit.

Pre-race I am typically freaked in an excited sort of way, but pre-Lowell I was freaked in a full-fledged freaked sort of way. I had good reason: while the worst of my Water Row wounds have healed, my ankle is still slightly swollen and my forearm aches when I get in the aero position. (The latter I learned less than 24 hours before, when I got Skerritt back from ATA and went on my first aero-type ride in a month. Glutton for punishment that I am, I went back to The Scene for this spin, and by that I mean Water Row just not that section of Water Row.)

Most importantly I was still feeling the impact in a mental sort of way; while some call my big-gear-low-speed “you-stay-where-I-can-see-you-and-hold-your-freaking-line” type of riding of the last month “smart”, I call it “spooked”.

As proof of how freaked I was in Lowell, I submit to you the usual Skerritt-turned-Viper-in-transition-pre-race photo: 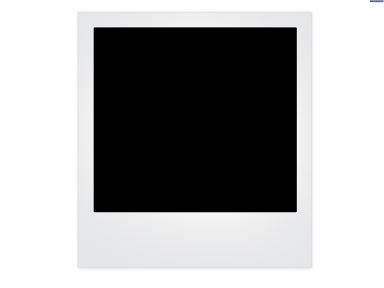 Shocking but true: I was so freaked that I couldn’t even bring myself to snap the usual “Viper-racked-and-ready-to-roll” photo. Say it with me: “Houston, we have a problem.”

This race was not on my original 2012 line up. Between Cohasset and Nationals I was to be completely race-free, by design: since I started racing in April this year, my coach said it would be good to have a race-free July to rebuild before my “A” race was upon us in August. As Daughter #1 would say, that sounded “solid”.

But then in June I won a free entry to any 2012 FIRM race. (FIRM put out a call for race reports, said they’d print the winning entry in their newsletter and give the author a free race entry; they picked my “Racing Gives You Wrinkles”. How cool is that?!?) Back then I had no idea that I’d need a race between Cohasset and Nationals to regain my confidence post-crash.

To say I went into this race with low expectations is an extreme understatement. When asked about goals, I used words like “remedial”. I am mortified to report that I even once said the purpose of the race was to “get back on the beast that threw me.” (I regretted it immediately and apologized to Skerritt, who is not a beast and did not throw me. Why must we lash out at those we love? Deep deep sigh. Sorry again, buddy.) I even went back to the three goals I set for myself before my very first tri: “don’t hurt anyone else, don’t hurt yourself and finish.” With that kind of an attitude, I stepped up the shoreline on Lowell’s Rynne Beach.

The Swim
The swim was a super-short .25-miles, which was great for me in two ways.

First, it made me feel fast again, a feeling I feared was gone along with Skerritt’s original aerobars. (It is hard to swim fast when you have chunks of loose flesh flapping in the water. Sorry for that image, but it is true.) Case in point: I reported to Coach Tim that my first post-crash pool swim “was the type of workout that brings tears to your eyes, and not the good kind of tears but the ones that come with thoughts like ‘I should give my slot at Nationals to someone who deserves it.’ ” His response: “It’s one workout, let it go.” Usually so obedient, I’ve struggled to heed this command.

Second, the swim’s brevity meant less opportunity to contract typhoid fever in the river whose tainted 19th century past earned it the nickname River of Death. (Would someone please refresh my memory as to why I don’t just run marathons? Oh yeah, right—I suck at them…that’s why! Sorry Lowell; I don’t mean to disparage you. Truth be told I think you’ve come a long way since the days you considered the river both sink and sewer. I’m just an ocean snob, that’s all. And we all know there’s no converting an ocean snob.)

The Bike
Viper apparently accepted my apology and we are simpatico again. We had a few sketchy miles in there—as I insinuated in the headline, it wasn’t just bike, body and brain that were scarred; the pavement was scarred too…yep, the course crossed scarified pavement for what felt like 20 miles, but that’s unlikely seeing as the whole bike course was only 11. (A friend estimated it was about four miles of etched asphalt.) The worst part wasn’t the mental angst (since the pavement looked really reminiscent of Water Row, just before The Crater) or the scarification itself; it was the not having any idea when it would end. I asked a traffic cop as I whizzed past “how much more of this crap road?” He either didn’t hear or considered that classified information; his response was a very nice but totally useless double-thumbs-up.

Despite the scary scarified pavement that came without warning (gentle nudge to my friends at FIRM; this is what microphones are for pre-race), I had a blast on the bike. Around Mile 8 I giddily decided my next upgrade should be neither race wheels nor a power tap but a little button I can push to bleet out “ON YOUR LEFT!” since I had to say it so often. (OMG I can’t believe I thought that! How pompous and arrogant can I get? Clearly I forgot my manners at T1. Fear not; I’ll get my comeuppance at the Age Group National Championships in Burlington, Vermont on August 18th.)

Bike result: 29:51. I knew I had done well on the bike by the usual means; Viper had little company when I tucked him in at T2. I’d later learn that I had the second best bike split of the 65 chicks…and the 7th best if you add in the 90 boys who raced. Best bike split of the day would have gone to Eric Pasinki (25:59) but he was DQ’d (I don’t know why) so Jeffrey Donatello’s 26:57 took the day. I came in 51 seconds back from the best female cyclist, the amazing Karen Mackin.

First race for my new kicks. Any guesses as to why I bought red/black?

The Run
I won’t bore you with a blow-by-blow account of my run, mostly because a coworker sent me this hysterical Onion article underscoring how ridiculously detailed we endurance athletes can be when telling stories about trials, tribulations and blisters; after I finished laughing hysterically, I started to wonder whether maybe, just maybe, she was trying to tell me something. (Nah—you’re right; she couldn’t have meant me. After all, my blister stories are fascinating.) Still, in deference, I will cut right to the chase which is kind of the perfect word choice because in this case “cut to the chase” is not just a figure of speech—I really was chased on the run.

I’ve always thought it would be big, BIG fun to have a race come right down to the wire. Lowell reminded me that playing with wires can lead to electrocution.

Just past the half-way mark, a skinny little thang (read: real runner) sidled up to me and uttered The Dreaded Words. Now, there are actually many variations of the Dreaded Words (“good job!” “keep it up!” “lookin’ strong!” “you’ve got this!”) but they all mean the same thing: “stand down, loser, I’m gonna pass you and once I do you will watch my back and sulk the rest of the race.”

I was dog-tired when I heard The Dreaded Words. She looked tired too but in a better-than-me sort of way. In my mind she became a Great Runner while I Sucked. I started imbuing her with imaginary athletic accomplishments; she captained the cross-country team at some Division 1 school. She BQs every year and runs mile repeats in the fives.

Once the training is done and the chip is around your ankle, it can all come down to what your brain tells your body. Fortunately for me, in the brain department I’ve got a secret weapon: the brain I was issued is a left-handed one and studies show that lefty brains are both more creative and more forgetful that the standard right-handed model. This comes in mighty handy when you need to concoct crazy stories and forget pain.

“She may be a Division 1 BQ-er but you’re Jonny Brownlee,” my brain told my body. 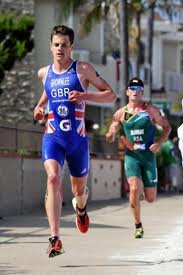 British Olympian Brownlee makes the run look like a cakewalk

“Wait…with all due respect, screw Britain; support Team USA! OK, you are Bennett-Groff-Jorgenson all wrapped up in one.” 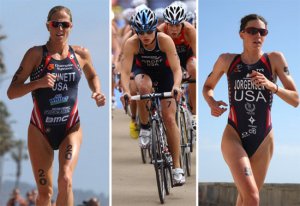 As Bennett-Groff-Jorgenson, I/we drew an invisible line from the tip of my/our front toe and refused to let The BQer cross it. (Of course I/we had to keep re-drawing the darned line as I/we ran, which kept me/us distracted from the intensifying pain.) The Olympians forced Division One back where she belonged (i.e. behind me/us). She fell far enough behind that I/we could no longer see her in my/our peripheral vision, so as I/we passed a glass door, I/we snuck a peek at the reflection to keep track of her, reminiscent of Beardsley/Salazar circa 1982… 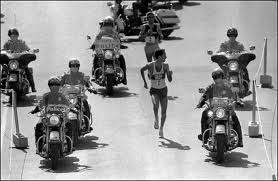 Duel in the Sun. 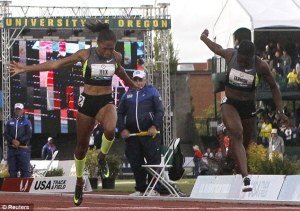 Unlike in Oregon, there was no talk of run-offs and coin tosses and no one studied our torso leans; while the timing chips put us both at 1:00:41, it was indeed visible to the naked eye who crossed first and that’d be me. I soon found out that this time was good enough to place–not just in my age group but overall, as in the second woman across the finish line. That’s a first for me in a tri (I’ve placed first OA in one duathlon.) I also found out that Division One’s actual name is Patti Thorp; we hugged sweaty hugs and joined the incredible Karen Mackin on the podium where we were given medals so crazy-big that I joked we could incorporate them into our strength-training regimens. When Bill Fiske put the medal around my neck I felt like this:

To put it in perspective, here’s the OA Wild Cat medal hanging next to a couple Streamline medals on my wall in The Bike Cave:

See what I mean?

Full overall results for all athletes are on the FIRM site; the top three OA are as follows: (Glutton for punishment that I am, I include the super-speedy winning boy times. You can’t reason with me; despite clear anatomical differences, I really want to be that fast!)

Net-net: Lowell, you slather some fresh tar atop that scarified pavement and I’ll heal the rest of my mental wounds. Let’s meet again in 2013… when my goal will be to go sub-one-hour 🙂

That’s all for now. As usual, thanks for stopping by. Have blind faith in the Clean Water Act of 1972, don’t get spooked by scarified pavement, and let your favorite Olympian(s) take over when it’s down to the wire. Thanks to Wendy and Bill of FIRM Racing and Elaine of Vescio Multisport Performance Services for the race entry that helped me get my confidence back; you guys rock!

I'm a 40-something single mother of three--two great human girls and one four-legged Dalmatian banshee--who is hellbent on swimming, biking and running straight through my midlife crisis. Care to tag along? Crazy loves company! ;)
View all posts by garmin_girl →
This entry was posted in Uncategorized and tagged FIRM racing, Triathlon, Wild Cat Sprint Triathlon. Bookmark the permalink.