Operating Under the Influence

We all know questionable decisions can be made when one operates under the influence of hops-based beverages. I am here to warn you of a force that doesn’t get nearly as much press but is equally influential: the power interval. While beer is more likely to lead you to ruin via a rousing rendition “Free Bird”, operate under the influence of a power interval and you might find yourself, say, directing the next local 10K.

Let me explain myself.

It started one day as I was executing yet another a “Tim Special” workout, the whole point of which appeared to be to execute me. (10 min wu / 5x 5 min @ 150-155 HR / 5 min spin / 5 min cd on my trainer-mounted Museeuw, to be precise.) To keep my mind off the pain between intervals 4 and 5 I checked my Blackberry, read this note from the president of the Highland City Striders, my local running club:

From: “My adrenaline-filled-big-big-smile immediate response:

I had no idea what I was getting into; the endorphins made me do it. But so began my four-month career on the other side of the race equation, which came to a thundering end last Wednesday night at Kelleher Field in Marlborough, Mass. as the Striders held the Fourth Annual Running With the Wolves 10K with me in the starring role as RD or as Jim calls it Head Kahuna. I use the word “career” very lightly

this is how much being an RD pays

and the word “thundering” very literally

micro-storms tore through the region and forced us to hastily concoct a Plan B: in the event of hail and lightning, we’d squish 200+ people into the nasty under-the-bleachers space where generations of high-school football teams have gotten half-time pep talks.

I can’t say for certain that it’s harder to direct a 10K than it is to run one, since I’ve never actually run a 10K…unless you count the one at the tail-end of an Olympic triathlon. (Stop rolling your eyes—it really is different; just ask my Ironman friend LeAnne, who panicked about her first “standalone marathon” despite finishing six—yes, I said six—Ironmans. OK, I take that back; we should all roll our eyes at LeAnne, since she is clearly certifiable…but my 10K point is valid.) Regardless, I am here to tell you that this thing called race directing is, as we say in Bah-stun, wicked haaaaa-d.

While you need time, focus and a patient family to train for a race, to put one on you need mile markers, cones, vests, water, cups, canopies, massage therapists, signs, press releases, photographers, food, bib numbers, safety pins, cash boxes, 56 volunteers, the permission of the city and the DPW and the police (x2 if the race goes through two towns). You need misting stations in the event it’s hot and medical professionals in the event runners still faint.

As RD you don’t have to run the race, but you can still hyper-ventilate.

In the early stages of this race director gig, I was like a pre-teen worried that no one would come to her party. 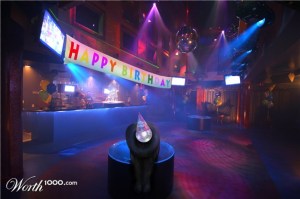 Even scarier than no one coming.

As if my mind wasn’t spinning enough already, I then learned I had super-big shoes to fill: at a team meeting I was told that last year’s RD spent the night before the race baking chocolate-chip cookies for the entire race field. You read that right. Now, we all know this chick rarely stays up late and never bakes. What on Earth had I gotten myself into? Egads! 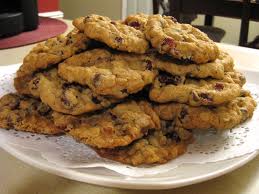 I bet they were yummy, too.

While I didn’t know how to direct a race, fortunately, I was surrounded by people who did (aka the Highland City Striders). They had successfully grown this race from its 2009 inception to present and they stuck with me like a loyal pace team (unlike the not-loyal-at-all Nike 3:45 Pace Team at the 2011 Chicago Marathon, the whole lot of whom unceremoniously ditched me at the half-marathon mark, leaving me to flail my way to the non-BQing-time of 4:32:25. Great big meanies.)

and Donna got it printed on shirts:

Jim bought a bull horn. Scott made sure people parked in the right places and Stan masterminded the brilliant Plan B (which I came to think of as our version of Boston’s July 4th emergency evacuation of the Esplanade. Only minus a few hundred thousand. And minus Jennifer Hudson. But we had Amy Hutton singing the National Anthem so we totally had the better party.) 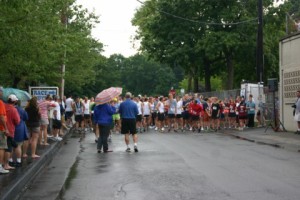 Amy singing at the start. It had stopped raining so she really didn’t need the umbrella, but you know how divas can be: delightfully Diva-ish.

Mike organized scores of volunteers to serve as course marshalls. Liz and Julie bought cars-ful of watermelons, bananas and my solution to the Cookie Dilemma—granola bars. (Hey, they have chocolate chips, right?)

Dom served as sweep, ensuring all our sheep I mean runners were herded home. 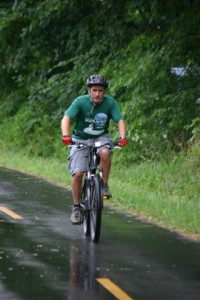 Dom, caught in the act of sweeping.

As for me, I mostly fretted—first about what kinds of communicable diseases lurked in those locker rooms we might have to use if forced to seek shelter from a storm.

sinister creepy and lurking for sure.

objects in photo are closer together than they appear.

the cookie plate was empty and it was all my fault

this is the only time that guy in the yellow would be seen in the pack. Blazing fast!

I never used the bull horn Jim bought, but somehow ended up with this microphone

I am forever grateful to Amanda Kourtz, who set a new female course record of 38:11 (6:08.9 pace). The previous record was 41:28 (6:40.6 pace) and if it was still standing this year I’d have been tempted to train like crazy over the next 12 months and attempt to beat it next year. Thank you for saving me from myself, Amanda!

Daughter #1 and her friend Annika also left their mark on the race; after the trophies and medals were gone, they presented a few “creative awards”

one for the loudest running sneakers

rockin’ some rather loud kicks

…and another for most creative running attire: 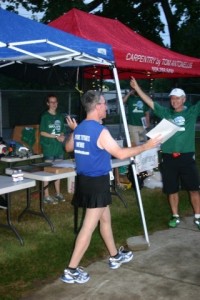 “It’s not the first time I’ve gotten this award!” he said.

And it seems like everyone had a good time, based on the post-race survey results. Those surveys gave us lots of advice on how we can make the race better next year. Among those tidbits: one repeat runner requested we bring back the cookies. Yep. It’s true. Epic fail. Apparently, granola bars are no substitute for the cookie.

That’s all for now. Don’t impale yourself on any poles or get drunk enough to sing “Free Bird”…and be careful what kind of craziness you commit yourself to next time you’re under the influence of a good power interval! 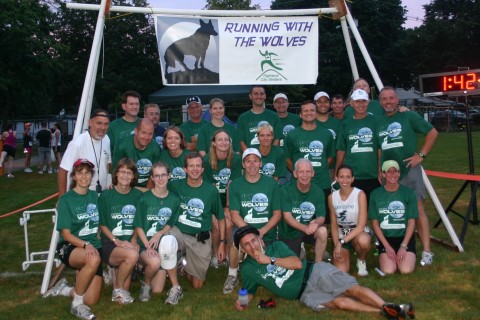 I'm a 40-something single mother of three--two great human girls and one four-legged Dalmatian banshee--who is hellbent on swimming, biking and running straight through my midlife crisis. Care to tag along? Crazy loves company! ;)
View all posts by garmin_girl →
This entry was posted in Uncategorized and tagged Highland City Striders, Running With the Wolves 10K. Bookmark the permalink.

6 Responses to Operating Under the Influence