“You Can Drive FAST, Young Lady, But…”

Yesterday during the Wrentham Duathlon’s bike leg I had a flashback to my first encounter with an angry, bullhorn-wielding state trooper. Not-so-sweet 16, I nervously toyed with the stick shift and prayed for no ticket as that officer’s face turned the color of my 1983 Saab’s paint job and he barked: “YOU CAN DRIVE FAST, young lady, BUT YOU CAN’T DRIVE FER SHIT!!!” 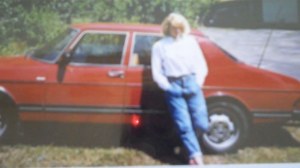 I won’t bore you with the minutiae; suffice it to say that I showed wisdom beyond my years and by that I mean I neglected to mention that I was speeding home from a junkyard, where I had gone in hopes of finding a hood medallion to replace the one I’d crumpled a few days prior. (I was, however, dumb enough to think that if I scrimped and saved and paid the $400 ticket, my father wouldn’t find out. Note to all teen drivers: insurance companies are great big tattle-tales.)

Why’d that trooper’s rant return to me in Wrentham on April 15th 2012? Because I can ride fast on my hot little Quintana Roo whose race day nom de guerre is Viper, but my bike handling—cornering, climbing, descending, shifting—lacks a certain finesse.

The good news is I’ll fix this little finesse problem, and when I do, I’ll be even faster 🙂

Yesterday in my first multisport race of 2012 I rode 10.85 miles in 31:27, which was fast enough to earn the fifth best female bike split of the day (129 chicks raced). Damn, boys are fast—the fastest woman (that’d be Jill Herrick, she who rode 29:54, is officially my idol) came in 18th place overall when you count both the boys and the girls; I was 47th place overall. Full results are here, and they leave me very very eager to figure this bike handling business out.

The ride was a blast. Per usual I found my place in the pack and two highly capable challengers quickly emerged. They kept me busy the whole race—#37 was riding a red and white Cannondale that made me pine for Maverick the Second; #310 rode a black Felt and wore a “Bay State Triathlon Club” jersey. Both were boys—I didn’t find any females to ride with this time, but truth be told I prefer riding with the boys. (Especially when they do a double-take once they realize my gender. Fun.)

310 whizzed past me in the first mile out of transition; the speed with which he conducted this passing insinuated that he mistook me for roadkill; not. Little did he know that a) I was still riding with my feet on top of and not in my shoes and b) my coach had told me to concentrate on my cadence and not on tons of speed in the early phase and I was actually trying to listen to him because I think he is pretty darn smart about this stuff. So I let 310 go but vowed he’d feel Viper’s venom—I meant it in the nicest of all ways, of course 😉   Long story short: 37, 310 and me (156) changed places at least a dozen times. For purely journalistic reasons I find it incumbent upon me to note that I hit T2 before either of ‘em 🙂

Number 37 found me post-race before I found him (I always seek out the athletes who make an event memorable, to tell them how much fun I had racing with them; it was nice to be sought out). He turned out to be Tim Blake, M 25-29 and he told me I was a great cyclist, which of course made me beam just a little. It took some detective work but I found 310 thanks to some other Bay Staters; he was Dean Ferioli (M 45-49). Interestingly enough, the race results show the boys took the duel right to the line; Tim finished one second before Dean (1:12:29 and 1:12:30, respectively).

Viper looked the part yesterday, outfitted in a set of borrowed Zipps made for Storck with lovely blue hubs (thanks, Husam and ATA Cycle!)

Oh yeah, I suppose it should also be noted that we ran during this little gig, too, it being a duathlon and all. These dualthon organizers make us run twice even—once before the bike leg and once after; they apparently did not get the memo that too much of a good thing is still too much. So we ran 3 miles, biked the 10.85 and then ran another two miles. Here are all my splits:

The runs felt really good—run one was eased greatly by my training partner accompanying me (rather chivalrous of him, as he is a much better runner and could have gone faster) but by run 2 I was on my own and had to suck it up, pull it together and do it all by my little old self. I felt good about that pace—for now.

That’s all the news that’s fit to print on Wrentham; as usual, thanks for stopping by. I hope you ride fast, thank your Tims and Deans, make progress and avoid confrontations with angry bullhorn-wielding troopers. See you at the races!

I'm a 40-something single mother of three--two great human girls and one four-legged Dalmatian banshee--who is hellbent on swimming, biking and running straight through my midlife crisis. Care to tag along? Crazy loves company! ;)
View all posts by garmin_girl →
This entry was posted in Duathlons, My Race Reports and tagged Duathlon, Events, multisport, Quintana Roo, Sport, Tim Blake, Triathlon, Wrentham. Bookmark the permalink.