As I write this, America’s Sister Golden Hair is running through my head; lately I’ve been one poor correspondent. Sorry about that. Silver lining: America has finally given Barry White the boot. (Hang with me a bit and that sentence will make sense. Promise.)

Unlike last winter, I can’t claim to have been buried in the snow this season—Lord knows we haven’t seen much white stuff. That said, I do have about 19,642 reasons for going quiet; it’s been an exhausting, if not snowy, off-season. Lucky you, I am now back and ready to blog.

This blog post is my pre-Season Three attempt to go all tabula rasa (if you forget your Aristotle, Freud and St. Thomas Aquinas, click here. If you still don’t get it, think Romney-Campaign-Meets-Etch-a-Sketch.) In other words, the purpose of this post is to quickly catch you up on all things CJ…all the blogs that brewed in my brain but never materialized. Then we’ll be off to the races as if this little hiatus never happened.

Here’s the skinny on my off-season:

Hell No I Am Not Running the 2012 Boston Marathon. A statistically significant number of people—friends, family, neighbors, the owner of the local art supply store—are under the mistaken impression that three Mondays from now I’ll run the Boston Marathon with the rest of the crazy people I mean marathon runners. I find this intriguing, especially since I have not once this year littered anyone’s lawn with hats-gloves-Fuel Belts I got sick of lugging on long training runs.

First…Last…Everything.  Before “Sister Golden Hair” took over, John “The Biscuit” Cage and Barry White had been grooving in my gray matter since February 26th and the 4Cs were completely to blame. That’s because the 4C’s—a relay team made up of three Christines (Tierney, Festa and yours truly) and one Christy (Roush)—were the only chicks to register as “fillies” for the Hyannis Marathon Relay. Ergo (since we’re already using Latin in this post, we might as well stick with the theme) our overall time of  4:08:10 made the 4Cs first, last, and everything in our category. It is unclear whether we were the only chicks pounding the pavement that day who were hefty enough to meet the “filly” requirement (un-indoctrinated: “fillies” is a sporting-community euphemism for chicks who weigh (gasp) 140+ pounds. The big boys are “clydesdales”) or whether we were the only ones honest enough to ‘fess up. Doesn’t really matter—the end result is the same and we’ve got the painted clamshells (Hyannis gives these in lieu of trophies, how cool is that?) to prove it…or rather we will as soon as we figure out how to get them from race director Paul Collyer.

If you’re up on your Ally McBeal trivia, you’ll get the Barry-and-Biscuit connection. If you aren’t, here’s a refresher course, courtesy of YouTube.

While we share a first initial, we didn’t necessarily share goals. C2 (Festa) had been sick for  weeks and simply wanted to show up and keep moving. C3 (Tierney) was our firecracker, freaking us all out to one extent or another with a sub-eight-minute-mile goal and thoughts that we could actually place—even in the open division (little did we know our fearless leader, C4 aka Roush, had outted us as fillies during the registration process.) Speaking of C4, she was our “happy to be running” C—her stated goal was to “not embarrass anyone”.

As for C1, that’d be me and I was my usual nervous wreck with better-than-usual reason; I was still smarting from the utter failure of my first race of 2012, a 5K in Lowell, Mass on New Year’s Day.   OK that 5K wasn’t a total failure—I did learn a valuable lesson and that lesson is this: I should not under any circumstances attempt to keep pace with professional triathlete Ethan Brown. Yes, I got all sorts of excited at the start line to be rubbing elbows with Ethan (he’s from Lowell and turned out to support his hometown race.) Instead of sticking with my plan (run the first half at 7:20-ish pace, descend from there if I feel good) I bolted out of the gate like a corralled mustang, trying to keep up with this 20-something phenom. And I did—for about an eighth of a mile. OK, maybe a sixteenth. Then he sped up and I wilted. I finished in 23:43.21—which means that instead of averaging a sub-7:00 pace as I’d hoped, I only pulled off 7:40s. Yuck.

To cut to the chase (since I promised that type of blog post), I got lucky in Hyannis. In the crazy-ridiculous winds, I found a runner (his shirt said “Cape Cod Athletic Club” so I figured he knew a thing or two about the course) who shared my pace but was more steady and certain of himself than I am as a runner (I’m working on that). I followed him until he dropped me on a hill (who put hills in Hyannis? I’ve always thought of the Cape as flat.) Averaging 7:46 pace for just over seven miles, I had a great race and was thrilled to pass off the baton at Craigville Beach, which I am about to do in this photo: 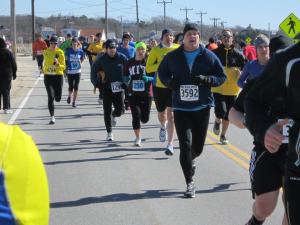 that's me on the far left, very very happy to have spotted C2.

Pre-race I set my Garmin to beep every quarter mile and show me the time it took me to cover that distance. I figured as long as most of ’em came in at 2 minutes or less I’d call it a good day.  By that metric it was a better than good day. Elated about the steadiness of the effort, I keyed my splits manually into TrainingPeaks for my coach (as if the data file upload wasn’t enough). He said forget knee and IT band issues—my next injury will be carpal tunnel from excessive post-race data processing. But I’m new to this whole “run fast” thing, so seeing that I can sustain an effort for seven freaking miles is a huge mental boost. Lest they go to waste, here they are in all their obsessive glory:

To me, the lesson of the weekend was clear: Whether I’m hanging with the 4Cs or tucking in behind Cape Cod Athletic Club Dude, I am at my best when I am a part of something bigger than just me. I suppose that says it all. 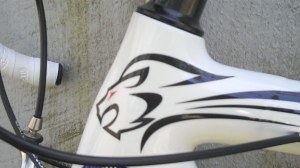 This lion is the symbol for Museeuw, a rather fancy-schmancy brand of bike designed by former pro cyclist Johan Museeuw, whose fans nicknamed him “The Lion of Flanders” for his fierce determination and Belgian blood (Flanders is the northern part of Belgium). True, towards the end of his career Johan’s blood contained something a little stronger than determination and by that I mean EPO but that’s not the part for which long-time blog readers should brace themselves; this is:

This lion graces the head tube of Maverick the Third.

Yes, you read that right: Maverick the Second has officially retired. Maverick the Third—or, as he prefers to be called, M-3—has hit the road. Here he is, acclimating nicely to the Bike Cave.

More on M-3 later, but suffice it to say he is settling in (83 miles as of this writing) and getting used to sharing his rider with Skerritt (whose race-day nom de guerre is Viper. Yes, there will be a quiz on all names and nicknames later.) 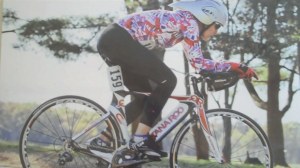 Refresher: this is Skerritt. Well, here he is Viper, as he is racing. And he raced well that day oh yes he did--he's well on his way to taking first place overall at the Wrentham Duathlon Nov 2011.

As for me, I am rather enjoying M-3’s flax-carbon frame and getting used to having a non-red bike. The love affair between me and red bikes is a long-standing one. Case in point: 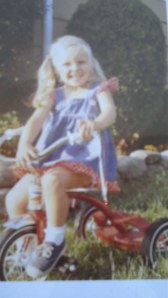 Lions and Tigers and…Wolves??? All off-season I was wanting to connect more with my local running club, the Highland City Striders. I pay my dues (though never on time–sorry about that, Kevin), but hardly ever run with them. The problem: my coach-designed workouts rarely resemble the runs the group does. So I was searching for a way to connect. Careful what you wish for: The Striders asked me to be the Race Director for the annual 10K, Running With the Wolves. I said yes, and I am just now beginning to learn what that “yes” entails. The tentative race date is July 18th and I am extremely excited about it and a wee bit terrified too. More on that later, for sure.

Whew! I’m glad I got this all out; it feels good to have the tabula be rasa for a bit.  I promise to be a better correspondent if you promise to meet me in the middle, make peace with your 19,642 reasons, embrace your inner filly and for God’s sake listen to Barry. He sure knows what he’s talking about. You got it together, baby. Whether you’re first or last, you’re some kind of everything.

Season Three? Bring it on.

I'm a 40-something single mother of three--two great human girls and one four-legged Dalmatian banshee--who is hellbent on swimming, biking and running straight through my midlife crisis. Care to tag along? Crazy loves company! ;)
View all posts by garmin_girl →
This entry was posted in Blogs on blogging, Maverick the Second and tagged Boston Marathon, Chicago Marathon, Ethan Brown, Hyannis Marathon Relay 2012., Maverick the Second, Maverick the Third, Museeuw, triathlon training, triathlons. triathletes. Bookmark the permalink.