Running NYC to Cairo Before Breakfast

On Wednesday I ran from New York to Cairo before breakfast. It took me fewer than three minutes to cover the distance between Lady Liberty and the Sphinx. 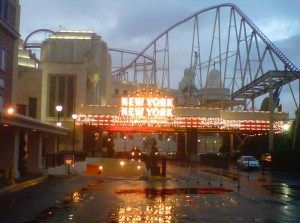 This non-gambling, two-drinks-and-I’m-plastered, early-to-bed-early-to-rise chick has headed west to the city of “adult emporiums”, drive-through weddings and 24-hour payday loans for Interop—the biggest tradeshow in my industry—almost annually since 1996. Over the years I’ve built up a decent immunity to the indecent insanity, but Interop 2011 brought a new challenge: how can I maintain training for my fast-approaching “70.3” in the epicenter of excess?

Pyramid and Sphinx at Luxor Hotel Las Vegas May 2011

I’ve always managed to eke out at least one workout whilst in Sin City. I call my usual run “CJ’s Three Continent Jaunt”: I start at the Luxor’s pyramid; head north to the New York, New York’s Coney Island-esque roller coaster; stay straight on “the Strip” until the Paris’ Eiffel Tower. In the real-world, this roundtrip trek is a whopping 15,222 as-the-crow-flies miles, but it’s a flat 5K in Vegas. While a single Three Continent Jaunt places me in the top 10 percent of exercising Interop-ers, that would not suffice this year. With my first-ever Half Ironman a mere 25 (gulp) days away, my training plan—even after modification by my coach to take into consideration the business trip—called for two swims, two bikes, two runs and one lifting session over four travel days.

What’s a business-travelling endurance athlete to do? Plan her training with the same level of diligence as she plans the business part of the trip. For the one or two of you whose Half IM training may someday be threatened by a Sin City biz trip, here’s my advice:

–          Vow to skip the absinthe. The city has all sorts of temptations—like, say, the allegedly addictive/psychoactive drink absinthe which is on tap at Fleur in Mandalay Bay. Before your bird touches down at McCarran, vow to not partake.

–          …and if you break your vow? Vow breakage happens in Vegas. Just shut yourself off before you’re ready to lead the charge to Excalibur for the 11 p.m. performance of Thunder Down Under.  😉

–          Get thyself to 24-Hour Fitness. You have scores of options for 24-hour gambling and “adult entertainment”, but only one choice in the fully-operational-gym category: 24-Hour Fitness on West Tropicana. It even has a two-lane, 25-yard pool and something that resembles a Keiser functional trainer. No gamble here–it’s the best $15 you’ll spend all day.

–          Operate on East Coast time. At 3 a.m. you may have to wait in line for a slot machine, but you’ll have your choice of either lane in the aforementioned pool. Pretend you’re in Boston. It’s six a.m. Geez, you’re late! Hurry up and get to the pool!

–          Choose Light Industrial over Heavy Porn. The gym is three miles from the Strip, which is perfect for bike-to-run (a.k.a. brick) workouts…grab a cab there, do your bike workout (whilst pining for your faraway Cannondale) then run back to your hotel. Just don’t take the porn-laden West Tropicana (here’s the Garmin file of my West Trop to Strip run)—the sidewalk disappears randomly plus its many intersections force you to either jaywalk (a big no-no here) or stop frequently. For a better run back to the Strip take Decatur to Hacienda (here’s the Garmin file on this one); it sports a continuous sidewalk (albeit cement), few stoplights and the businesses along it are more light industrial than heavy porn…a bonus in my book.

–          Prepare your jaywalking excuse. Even on Decatur the temptation is high to cross against the lights—especially in the early-morning hours when traffic is sparse. Rehearse what you’ll say should Las Vegas’ Finest call you on it. I recommend something along the lines of “but sir, I wasn’t walking I was running. Is there a jayrunning law, too?”

–          Plan to be very, very alone. Strip People are not like us; I guess there really is something in the absinthe. Your usual “outlier” status will skyrocket into the stratosphere when you opt for an early bedtime as colleagues head to skyjump off the 108th floor of the Stratosphere. You’ve been forewarned.

–          …but not entirely alone. With a little luck, you may cross paths with a kindred spirit. I am tickled pink to report that I did on Tuesday’s run. He had awesome form and was clearly no newbie. As we passed we exchanged glances—he of the 115th Boston Marathon logo on my chest, me of his been-through-the-wash-a-zillion-times Chicago Marathon shirt. I wanted to blurt out, “I’m running Chicago in October!” but I bit my tongue; I’m trying really hard to not be that much of a geek. Instead, we shared the secret-runner-society greeting (simultaneous smile/eyebrow raise/nod) and kept going. That split-second exchange remains the highlight of my trip.

Training through business travel: it can be done. On my first morning, I did my brick, iced, (first time I’ve been happy to have a room close to the ice machine), rolled my foot (yes, the golf ball came to Vegas) and still made it to the convention center by 7:30 a.m. The whole week, I missed only one out of my seven planned workouts—a 2000-yard swim that I’ll catch up on tomorrow. Not too shabby, methinks.

This time, what happened in Vegas won’t stay in Vegas—I’m taking it with me to Mooseman on June 5th  🙂

I'm a 40-something single mother of three--two great human girls and one four-legged Dalmatian banshee--who is hellbent on swimming, biking and running straight through my midlife crisis. Care to tag along? Crazy loves company! ;)
View all posts by garmin_girl →
This entry was posted in Half Ironman training. Bookmark the permalink.

4 Responses to Running NYC to Cairo Before Breakfast